My Story so far 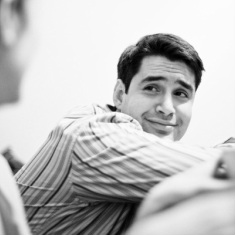 A Chicago area native, my first stage appearance was as an unnamed Montague in a 7th grade production of Romeo & Juliet.  After attending Interlochen Arts Camp in high school, I decided to make Acting my career.  I was accepted into Boston University's prestigious School of Theatre, where I received an intensive training in all aspects of Movement, Linklater Voice Technique, Alexander Technique, On Camera, Stage Combat, Physical Theatre, Shakespeare, and multiple acting techniques.  As part of this program I studied abroad at the London Academy of Music and Dramatic Arts, where I earned a certificate in classical acting. While there, I studied with renowned British classical actor John Baxter (one of Peter Hall's main actors) and Clowning master Mark Bell (the creator of 'The Play That Goes Wrong' on Broadway), among others.  While training in Boston, I appeared in professional productions with the Huntington Theatre Company and Boston Playwrights Theatre.   I was also selected to be one of a quartet of college students to sing with Anthony Rapp for the premier of his book "Without You". I graduated cum laude from Boston University with a B.F.A in Acting.
Post graduation, I moved to Chicago and began a busy professional career.  Chicago area credits include work with The Court Theater, First Folio Theatre, The Building Stage, Chicago Dramatists, Theatre Building Chicago, The Metropolis Performing Arts Center, Bailiwick Chicago, Hubris Productions, and others. I have also been employed as a children's theatre actor with groups such as the Windy City Players and Caton Enterprises.  I maintain a commercial career, appearing in multiple commercials, industrials and print ads, represented by Karen Stavins Ltd and the DeSanti Talent Agency for companies such as Firestone Tires, Strack and Van Til Groceries, and Cricket Wireless. I have appeared in several independent films in Chicago and Boston.

As a musician, I have had a unique set of influences stemming from my exposure to music making and performance from a young age through my Dad, who is a Cantor (Jewish musical clergy member). As a kid, I learned the dynamics of creating harmony and countermelody while making music in a participatory group setting--mainly vocally. As I got older, I picked up the trombone and got heavily into classical and jazz music, and took classes in music theory and composition in both high school and college, as well as learning basic keyboard skills. Meanwhile, I picked up the guitar at Jewish summer camp (I'm a stereotype) and learned how to play in folk and rock styles, eventually expanding to electric guitar and blues music (influenced by marrying a woman from the Mississippi Delta). Vocally, I have moved from musical theatre and classical vocals to more flexible styles through work with studios such as The Voice Lab, Inc and have a rangy baritenor voice that can communicate in different colors and tones. I

​I started writing music when asked to for a couple of theatrical productions, and quickly expanded to writing and recording my own songs. My skills at arranging increased after being appointment music director at a local Lutheran Church that uses music ranging from hymns to gospel to arena rock. This intensified during the pandemic that started in 2020, when we switched to virtual meetings and my collaborator and I made nearly 1000 different recordings for  the church. During this time I became much more proficient in music editing and producing as well as learning how to program drums and use synthesizers to create dynamic orchestral and electronic sounds. I also picked up the electric bass, adding depth to my compositions.

During this time, I was asked to take on a couple projects for businesses and associates composing custom music for them, and I Make Earworms was born.  Learn more about my custom music production services on the page dedicated to this part of my work.

My multi-disciplinary experience, strong technical background, and a natural ability to help others bring out the best in folks' work all combine to give me a unique, powerful perspective on performance coaching. I've been coaching and directing actors since college, and am nearing a decade of experience in working with musicians of different varieties and public speakers at improving their expressiveness and comfort in front of audiences. This has been enhanced by my training as an Alexander Technique Teacher (don't know what that is? Check out my website dedicated to this work). I have taught at The Old Town School of Folk Music, Green Shirt Studio, Morton College, the National Association of String Teachers, and in numerous workshops around the Chicagoland area. I also started as adjunct faculty in the theatre department at Columbia College Chicago just as the pandemic started (great timing). I love helping folks reach their creative goals, so get in touch to talk about how I can be of service to you.